This is my summary and review of the paper Monarch: Google’s Planet-Scale In-Memory Time Series Database

Monarch is Google’s modern time-series database.
Due to their scale, their monitoring infrastructure is gathering billions of metrics across all of their services.

Previously to Monarch, they had been using Borgmon, which is their internal ancestor of Prometheus.

Monarch has been built out of a need to outgrow Borgmon, as it had a number of issues.

As any monitoring and alerting system, Monarch is in a very critical path. So when designing it, they have decided to trade consistency for high availability and partition tolerance.

Monarch will drop delayed writes, and prefer returning partial data than fully accurate one.
They will, however, indicate that the provided data may be incomplete or inconsistent.

The system has been built to be as low dependency as possible. They will therefore store all monitoring data in memory instead of dedicated storage.
This is because all of Google’s storage systems rely on Monarch for their monitoring. They therefore cannot have circular dependency on the alerting path.

Note that Monarch does include a recovery logs mechanism which allow storing data for archival. However, that system is best-effort, and not involved in the query path at all. 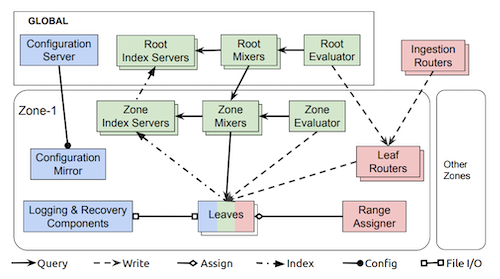 Monarch is subdivided in autonomous regional zones combined with global management and querying. But the data remains within a region, and queries go straight to asking for the data within the appropriate areas.

There are three different kinds of components within Monarch:

The Monarch data model has two schemas, targets and metrics.

Targets allow associating each time series with a source entity. For example, a running process or a VM.

There are multiple target schemas for the different types of entity being monitored.
For example, ComputeTask is a common target schema.

Monarch stores the data close to where it has been generated. So each target schema contains one field annotated as location. In the case of ComputeTask, it’s cluster, which specifies the name of the Monarch zone where the data will be located.

Metrics associate time-serie values with a target, such as the number of RPC tasks being served.

When writing data into Monarch, the following steps are followed:

Leaves do not wait for acknowledgement when writing to the recovery range. So, if the recovery log is unavailable, the system will continue working, minus long-term storage.

As there can be multiple leaves within a zone, they need to share their load accordingly, which means possibly having to move data across leaves.

Each zone has a range assigner, which balances load across leaves. If it decides to move a range of data R, the following happens:

Storing all the data naively as it is provided by the clients could be very expensive. For example, if each server sends their disk I/O, a lot of data will be gathered. But each disk’s value will never be useful. Rather, aggregated data by user will be much more useful.
Monarch therefore allows aggregating data during ingestion.

Monarch provides a querying language quite similar to SQL to retrieve metrics data.

There are two kinds of queries that exist in Monarch.

Standing queries can be used to condense data for faster subsequent querying, or for alerting.

The root mixer does level analysis, to send only the parts of the query that need to be executed by the lower level. The root also performs security and access-control checks, as well as possible rewriting of the query for static optimization.
Within the leaf, each query runs in its own thread, which are monitored and can be killed if they use too many resources.

Static analysis of the query allows pushing the query to be executed as close to the data source as possible.
For example, if the query is detected to retrieve only data from a single zone, the query will be pushed to that level.

When sending a query to children, Monarch uses Field Hints Index to skip irrelevant ones.
A Field Hint is an excerpt of a field value, used to detect whether a zone contains data about that value.
Each zone index server build an index of trigrams from their field values at boot time (which takes a few minutes), and stores it in memory.
A long-lived RPC connection is then kept with the parent index server so the field hints index can be sent upstream.
When considering sending a query downstream, an index server can therefore start by looking into that field hints index to check whether the zone index is likely to have that data or not.

Similarly to data ingestion, it is very important for queries to be fast, and to handle failures gracefully.

Therefore, if a zone becomes unresponsive, or too slow, it is pruned from the global system, and query responses are notified.
This allows returning queries rapidly, amid possibly missing some data.

Similarly, if a primary leaf receives queries to be processed. However, if it becomes unresponsive or slow, the query is replicated to fallback leaves, and the response is de-duplicated from the fastest of both queries.

All configurations are stored in the global area, and duplicated within zones to be reliably available.

Several types of configurations are available to users:

Internal and external are for customers, either inside or outside of Google.
Meta runs on a stable, older version of Monarch, and monitors the other environments.

The evaluation in the paper relies on data from the internal environment.

As of July 2019, Monarch stored nearly 950 billion time series, using around 750 TB of memory. During that same month, the internal environment ingested 2.2 TB of data.

In July 2019, around 6M query were executed each second.
95% of the executed queries are standing ones.

The main takeaway I am getting from this paper is how pull-based proved not to work at Google, which I find quite interesting in comparison with the success of Prometheus and pull-based metrics.

The highly distributed design of Monarch is also extremely valuable, especially in keeping all the data in memory, and storing it for long-term recovery as something secondary. That definitely makes a lot of sense for a monitoring system, where the data is interesting for a very short period of time.