OpenTelemetry is making observability much easier, especially by providing the first widely accepted vendor agnostic telemetry libraries.
The first signal the project implemented is tracing, which is now GA in most languages.

I am particularly fond of tracing, as I deeply believe it is a better way to pass data to a provider, whom can then process it and turn it into something actionable, whether it be a gantt chart of spans, or metrics for alerting.

But one of the most useful uses is distributed tracing, the ability to link spans across services into the same trace. If a service makes an RPC call to another, we can keep the trace context within them and get a global view of every request being made to a platform.

In the screenshot above for example, the trace has spans from 2 different services, frontend and cartservice.

What is trace propagation?

In order to be able to link traces between those services, some context has to be passed around. This is what trace propagation is about and that we are going to explain in this article.

Unless you are dealing with a legacy architecture which already propagates traces using another convention, you should rely on the W3C Trace Context Recommendation.
This recommendation is specifically for HTTP requests. But some of it can largely be reused for other communication methods (across kafka messages for example).

Trace Context specifies two HTTP headers that will be used to pass context around, traceparent and tracestate.

The traceparent HTTP header includes the root of context propagation. It consists in a comma-separated suite of fields that include:

The tracestate HTTP header is meant to include proprietary data used to pass specific information across traces.

Its value is a comma-separated list of key/values, where each pair is separated by an equal sign.
Obviously, the trace state shouldn’t include any sensitive data.

For example, with requests coming from public API endpoints which can be called either by internal services, or by external customers, both could be passing a traceparent header. However, external ones would generate orphan spans, as the parent one is stored within the customer’s service, not ours.

So we add a tracestate value indicating the request comes from an internal service, and we only propagate context if that value is present.

A context is passed

With both these fields being passed, any tracing library should have enough information to provide distributed tracing.

A request could pass the following headers:

The tracestate header provides a specific key/value that we can use to make appropriate decisions, such as whether we want to keep the context or not.

The OpenTelemetry specification specifies a propagators interface to allow any implementation to setup their own propagation convention, such as TraceContext.

A propagator must implement two methods, one for injecting the current span context into an object (such an HTTP headers hash), and one for extracting data from an object back into a span context.

For example, the following is the Go implementation:

Each instrumentation library making or receiving external calls then has the responsibility to call inject/extract to write/read the span context and have it passed around.

For example, the following is Rack extracting the context from the propagator to generate a new span in Ruby:

And the following is NodeJS adding the context into HTTP headers when making a request with the http package: 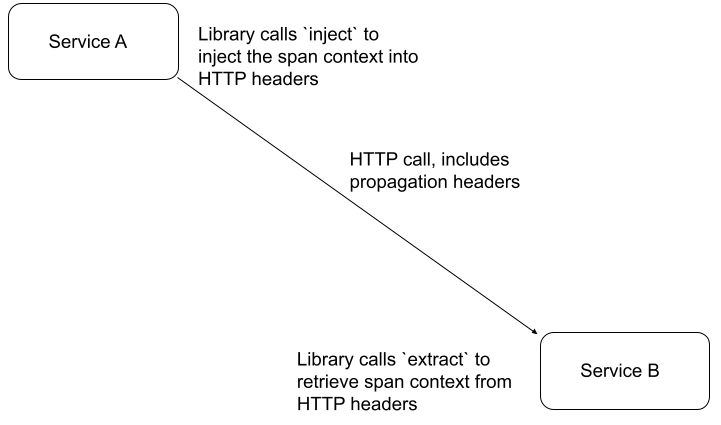 Note that each language implementation of OpenTelemetry provides multiple contrib packages that allow easy instrumentation of common frameworks and libraries. Those packages will handle propagation for you.
Unless you write your own framework or HTTP library, you should not need to call inject or extract yourself.
All you need to do is configure the global propagation mechanism (see below).

Not all services communicate through HTTP.
For example, you could have one service emitting a Kafka message, and another one reading it.

The OpenTelemetry propagation API is purposefully generic, as all it does is read a hash and return a span context, or read a span context and inject data into a hash.
So you could replace a hash of HTTP headers with anything you want.

The Python Kafka instrumentation calls inject on the message’s headers when producing a message:

And calls extract on those same headers when reading a message:

Any language or library that uses the same convention can benefit from distributed tracing within kafka messages, or any other communication mechanism.

Great! We now know how propagation for traces works within OpenTelemetry. But how do we set it up?

Each OpenTelemetry library is expected to provide methods for setting and retrieving a global propagator.

As you may have seen in the above specification link, the default propagator will be a no-op:

The OpenTelemetry API MUST use no-op propagators unless explicitly configured otherwise.

You should therefore always ensure your propagator of choice is properly set globally, and each library that needs to call inject or extract will then be able to retrieve it.

Each OpenTelemetry implementation will implement several propagators natively, including TraceContext, which you can use directly within your service. For example, the java one can be found as io.opentelemetry.api.trace.propagation.W3CTraceContextPropagator

Thank you for following along this exploration of context propagation in OpenTelemetry, which I hope now allows you to better understand how distributed tracing works within that library.
You should now be able to setup your own context propagation within any library instrumentation which communicates with external services, or receives communications from them.

And with distributed tracing fully setup within a platform’s tracing, you should be able to visualize the entire flow of every request coming into your platform, and more easily troubleshoot problems and issues.